I‘m always worried about the private information I have online. Maybe this is because I have been hacking for a long time, and I know everything can be hacked. This makes me a bit paranoid. I have never trusted web sites to keep my private information safe, and nowadays it is impossible to not have private information published on the web, such as a social media web site. Sooner or later you could get hacked, this is a fact.

Last week I had a very interesting experience.

I was testing a web application that is under development. This application had an option to allow me to sign into Twitter. If I selected this option, the application would have access to my Twitter public feed (such as reading Tweets from my timeline and seeing who I follow). In addition, the application would have been able to access Twitter functionality on my behalf (such as following new people, updating my profile, posting Tweets for me). However, it wouldn’t have access to my private Twitter information (such as direct messages and more importantly my password). I knew this to be true because of the following information that is displayed on Twitter’s web page for “Signing in with Twitter”: 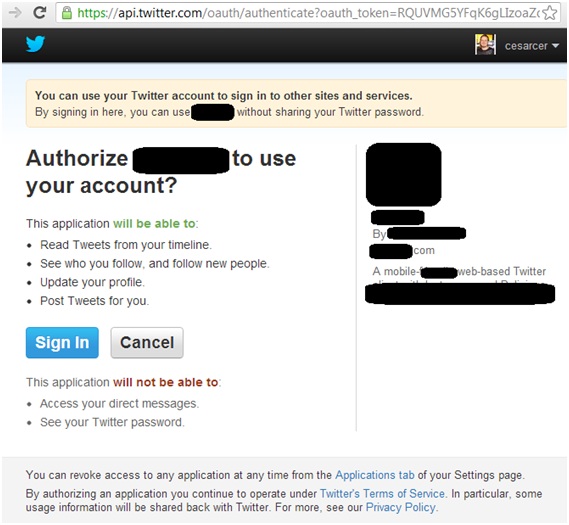 If you see an application that has access to your direct messages and you never authorized it, then revoke it immediately.

I love Twitter. I use it daily. However, I think Twitter still needs a bit of improvement, especially when it comes to alerting its users about security issues when privacy is affected.