In the information security world we tend to focus upon vulnerabilities that affect the application and network architecture layers of the enterprise and, every so often, some notable physical devices. Through various interrogatory methods we can typically uncover any vulnerabilities that may be present and, through discussion with the affected business units, derive a relative statement of risk to the business as a whole.

An area of business rarely dissected from an information security perspective however is the supply chain. For manufacturing companies and industrial suppliers, nothing is more critical to their continued business success than maintaining the integrity and reliability of their supply chain. For some industries – such as computer assembly or truck fabrication facilities – even the smallest hiccup in their just-in-time ordering system can result in entire assembly lines being gummed up and product not being rolled out the front door.


The traditional approach to identifying vulnerabilities within the supply chain is largely through a paper-based audit process – sometimes top-and-tailed with a security assessment of PC-based assessments. Rarely (if ever) are the manufacturing machines and associated industrial control systems included in physical assessments or penetration tests for fear of disrupting the just-in-time manufacturing line.

Outside the scope of information security assessment, and often beyond the capabilities of automated quality assurance practices within an organizations assembly line, lies the frailty of being victim to failure of a third-party supplier’s tainted supply chain.

For example, let’s look at a common microprocessor ordered through a tainted supply chain.

In early 2012 samples of the ST ST19XT34 were ordered from www.hkinventory.com.  The ST19XT34 is a secure microprocessor designed for very large volume and cost-effective secure portable applications (such as smartcards used within Chip&PIN technologies). The ST19X platform includes an internal Modular Arithmetic Processor (MAP) and DES accelerator – designed to speed up cryptographic calculations using Public Key Algorithms and Secret Key Algorithms.

The ST19XT34 chips that IOActive were charged to investigate were encapsulated within a standard SOIC package and were supposed to have 34kb of EEPROM.

Upon visual analysis the devices appeared to be correct.  However, after decapsulation, it was clear that the parts provided were not what had been ordered. 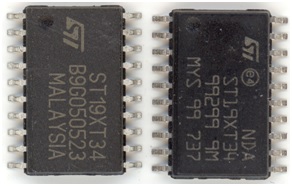 In the above image we have a ‘fake’ ST19XT34 on the left with a sample of the genuine chip on the right.  It is almost impossible to tell the left device was altered unless you have a known original part. 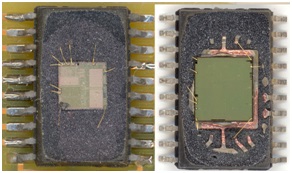 After decapsulation of the various parts it was easy to immediately recognize the difference between the two SOIC part.  The left ‘fake’ device was actually an ST ST19AF08 with the right being the genuine ST19XT34. 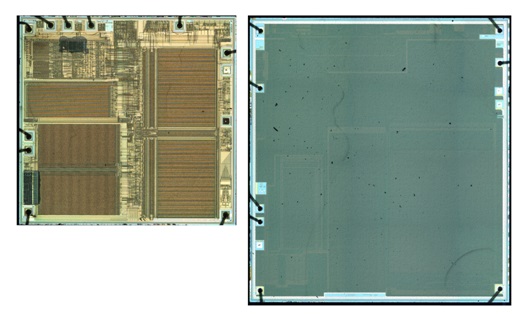 The ST19XT34 is a 350 nanometer 3 metal device (on right).  It contains a 34 KB EEPROM making the die much larger than the older and smaller sized device.

As the example above clearly shows, it is often very difficult to identify a tainted supply chain. While an x-ray in the above case could also have verified the integrity of the supplier if it had been part of the quality assurance process, it would not have detected more subtle modifications to the supplied microprocessors.

If it is so easy to taint the supply chain and introduce fraudulently marked microprocessors, how hard is it to insert less obvious – more insidious – changes to the chips? For example, what if a batch of ST19XT34 chips had been modified to weaken the DES/triple-DES capabilities of the chip, or perhaps the random number generator was rigged with a more predictable pseudo random algorithm – such that an organized crime unit or government entity could trivially decode communications or replay transactions?

The frailty of today’s supply chain is a genuine concern for many. The capability of organized crime and foreign government entities to include backdoors, add malicious code, or subvert “secure” routines within fake or counterfeit microprocessors is not a science fiction story, but something that can occur today. The ability to inject these modified chips in to the supply chain of any global manufacturer of goods is, quite frankly, trivial.

The cost of entry for organized criminals and government entities to undertake this kind of manipulation of the supply chain is high, but well within their financial capabilities – and, more importantly, they could reap great rewards from their investment.

Identifying a tainted supply chain is not a simple task. It requires specialized equipment capable of dissecting microprocessors at the nanometer scale, fiddly extraction of microcode, and skilled security analysts to sift through the code looking for backdoors and deliberate weaknesses in the algorithms.

It’s an expensive and time consuming proposition – but fast becoming  a critical component when it comes to assuring that today’s smartphones, Chip&PIN technologies and critical infrastructure control systems aren’t subject to organized subversion.