Not that long ago, motorized hoverboards were in the news – according to widespread reports, they had a tendency to catch on fire and even explode. Hoverboards were so dangerous that the National Association of State Fire Marshals (NASFM) issued a statement recommending consumers “look for indications of acceptance by recognized testing organizations” when purchasing the devices. Consumers were even advised to not leave them unattended due to the risk of fires. The Federal Trade Commission has since established requirements that any hoverboard imported to the US meet baseline safety requirements set by Underwriters Laboratories.

Since hoverboards were a popular item used for personal transportation, I acquired a Ninebot by Segway miniPRO hoverboard in September of 2016 for recreational use. The technology is amazing and a lot of fun, making it very easy to learn and become a relatively skilled rider.

The hoverboard is also connected and comes with a rider application that enables the owner to do some cool things, such as change the light colors, remotely control the hoverboard, and see its battery life and remaining mileage. I was naturally a little intrigued and couldn’t help but start doing some tinkering to see how fragile the firmware was. In my past experience as a security consultant, previous well-chronicled issues brought to mind that if vulnerabilities do exist, they might be exploited by an attacker to cause some serious harm.

When I started looking further, I learned that regulations now require hoverboards to meet certain mechanical and electrical specifications with the goal of preventing battery fires and various mechanical failures; however, there are currently no regulations aimed at ensuring firmware integrity and validation, even though firmware is also integral to the safety of the system.

Using reverse engineering and protocol analysis techniques, I was able to determine that my Ninebot by Segway miniPRO (Ninebot purchased Segway Inc. in 2015) had several critical vulnerabilities that were wirelessly exploitable. These vulnerabilities could be used by an attacker to bypass safety systems designed by Ninebot, one of the only hoverboards approved for sale in many countries.

Using protocol analysis, I determined I didn’t need to use a rider’s PIN (Personal Identification Number) to establish a connection. Even though the rider could set a PIN, the hoverboard did not actually change its default pin of “000000.” This allowed me to connect over Bluetooth while bypassing the security controls. I could also document the communications between the app and the hoverboard, since they were not encrypted.

Additionally, after attempting to apply a corrupted firmware update, I noticed that the hoverboard did not implement any integrity checks on firmware images before applying them. This means an attacker could apply any arbitrary update to the hoverboard, which would allow them to bypass safety interlocks.

Upon further investigation of the Ninebot application, I also determined that connected riders in the area were indexed using their smart phones’ GPS; therefore, each riders’ location is published and publicly available, making actual weaponization of an exploit much easier for an attacker.

To show how this works, an attacker using the Ninebot application can locate other hoverboard riders in the vicinity: 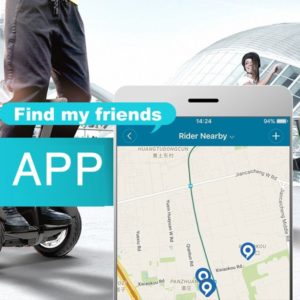 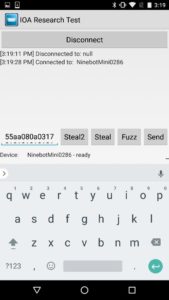 Using the pin “111111,” the attacker can then launch the Ninebot application and connect to the hoverboard. This would lock a normal user out of the Ninebot mobile application because a new PIN has been set.

Using DNS spoofing, an attacker can upload an arbitrary firmware image by spoofing the domain record for apptest.ninebot.cn. The mobile application downloads the image and then uploads it to the hoverboard:

In http://apptest.ninebot.cn change the /appversion/appdownload/NinebotMini/version.json file to match your new firmware version and size. The example below forces the application to update the control/mainboard firmware image (aka driver board firmware) to v1.3.3.7, which is 50212 bytes in size.

Create a matching directory and file including the malicious firmware (/appversion/appdownload/NinebotMini/v1.3.3.7/Mini_Driver_v1.3.3.7.zip) with the modified update file Mini_Driver_V1.3.3.7.bin compressed inside of the firmware update archive.

When launched, the Ninebot application checks to see if the firmware version on the hoverboard matches the one downloaded from apptest.ninebot.cn. If there is a later version available (that is, if the version in the JSON object is newer than the version currently installed), the app triggers the firmware update process.

Analysis of Findings
Even though the Ninebot application prompted a user to enter a PIN when launched, it was not checked at the protocol level before allowing the user to connect. This left the Bluetooth interface exposed to an attack at a lower level. Additionally, since this device did not use standard Bluetooth PIN-based security, communications were not encrypted and could be wirelessly intercepted by an attacker.

Exposed management interfaces should not be available on a production device. An attacker may leverage an open management interface to execute privileged actions remotely. Due to the implementation in this scenario, I was able to leverage this vulnerability and perform a firmware update of the hoverboard’s control system without authentication.

Firmware integrity checks are imperative in embedded systems. Unverified or corrupted firmware images could permanently damage systems and may allow an attacker to cause unintended behavior. I was able to modify the controller firmware to remove rider detection, and may have been able to change configuration parameters in other onboard systems, such as the BMS (Battery Management System) and Bluetooth module. 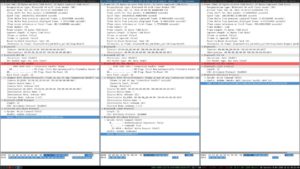 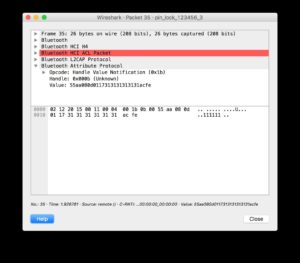 Figure 3 – Interception of Android Application Setting PIN Code to “111111”
Mitigation
As a result of the research, IOActive made the following security design and development recommendations to Ninebot that would correct these vulnerabilities:

IOActive recommends that end users stay up-to-date with the latest versions of the app from Ninebot. We also recommend that consumers avoid hoverboard models with Bluetooth and wireless capabilities.

Responsible Disclosure
After completing the research, IOActive subsequently contacted and disclosed the details of the vulnerabilities identified to Ninebot. Through a series of exchanges since the initial contact, Ninebot has released a new version of the application and reported to IOActive that the critical issues have been addressed.