Hi folks, I’m a huge Rick and Morty fan. Sometimes while watching it, I notice allegories and puns related to security, privacy, physics, psychology, and a wide range of scientific fields. Because of this, I’ve decided to review some Rick and Morty episode and share my observations with the wonderful folks who work in these fields and those who aspire to 😉 Enjoy!

A machine force feeding a human. Being brutally and utterly dedicated to our whims, the robots show us how perverted our ideas of success, good, and bad are when taken to an extreme – effectively giving us a taste of our own “medicine.”

Before we dig into what this episode means, here’s a quick summary from Wikipedia:

Rick is interrogated via a mind-computer link inside a galactic federal prison. Rick is interrogated via a mind-computer link inside a galactic federal prison. Summer and Morty attempt to rescue him, but they are captured by SEAL Team Ricks, who take them to the Citadel of Ricks and decide to assassinate Rick. Back at the prison, Rick tricks both the federal agents and his aspiring assassins by switching bodies with them. He then teleports the entire Citadel into the federal prison, prompting a massive battle. Amid the confusion, Rick rescues Morty and Summer and uses the Galactic Federation’s mainframe to make their currency worthless. The Federation falls into chaos and collapses as a result, with the aliens leaving Earth. Back at home, Jerry asks Beth to choose between him and Rick, but she chooses Rick. After the new status quo is established, Rick reveals to Morty that his ulterior motive was to become his de facto male influence. This escalates into a nonsensical angry rant, centered around Rick’s desire to find more of the discontinued McDonald’s Szechuan sauce, a promotional product for the 1998 film Mulan.
– https://en.wikipedia.org/wiki/Rick_and_Morty_(season_3)#Episodes
Lets dig in…

Rick is trapped in something called a “Brainalyzer” which is effectively a brain-to-computer link. This is a computer science pun in a couple of ways. It obviously references cutting-edge computer science research into literally connecting peoples brains to computers. In academic circles, researchers have affected a way to control a computer with your brain or have your brain controlled by a computer.

The Brainalyzer also serves as an ironic expression of the false ideology people have of computers: that they are NOT directly connected to our brains.

As a hacker, I can tell you that what you do when you try to break someone’s algorithm is basically argue with the person who wrote the algorithm in your head! One person’s implementation of their idea of what security is competes with yours; it’s all mind games. Coming back to the episode, this is literally what Rick is doing in the scene; inside his head, he argues with the person who is ‘securing him’ in the prison.

The flip side of this Brainalyzer – from a security perspective – is that it is a huge security design mistake. Interfacing the thoughts of the prisoners to the prison computer system (which controls the prison) makes separation failure a huge security risk. Ironically, the prison exists to physically restrain the prisoners because they are bad people who think of doing bad things. The Brainalyzer is implemented in utter reverse to this idea; in a sense, it is a way to control the prison in the literal minds of the people they are imprisoning.

Rick’s Mind Virus(es)
The strategy the interrogators employ is to ask Rick to share the memory of his first successful creation of the Portal Gun. Rick then leads them to the memory, which turns out to be a complete fabrication. 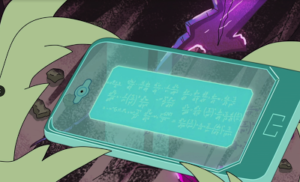 What has happened here is Rick has convinced them one kind of information or data in his head is actually another kind of information or data. This is strongly analogous to what is called a memory corruption attack. In a memory corruption attack, the adversary convinces the machine that malicious data (one kind of information) is actually execution code (another kind of data), or that “data” should be treated as literal instructions. This flaw allows the attacker to inject data that is interpreted as code, thereby allowing the attacker’s data to arbitrarily influence the behavior of the machine.

So now we see Rick has triggered a memory corruption bug! And he does this in order to inject code into the machine giving them access to his brain. Rick confirms this by referring to the code he gave them as a “virus,” and stating that he did it to install a backdoor that allows him full control of the facility.

Rick literally psychoanalyzing his opponent – “getting inside his head.”
Rick now has full control of the “memory” they are trapped in and reveals that the entire time he was fooling them. What is ironic about this is that Rick is physically trapped in a machine that allows them direct access to his brain. This is to say while they are “inside his brain,” because Rick was hustling them this whole time, he was actually inside their heads!

After escaping the Brainalyzer, Rick suddenly needs to use the bathroom on Level 9. This is obviously a social engineering exploit. Restrooms are often located behind security barriers. However, if there is a kind reception person, they can usually be talked into letting you go through to use the bathroom; at which that point, you’ve bypassed security and you’re in! A very old trick, Kevin Mitnick would probably giggle to see Rick haphazardly employ this tactic.

Rick social engineering his way to level 9
The allegory becomes a little more obvious after this scene. Starting from a subtle, nuanced example of a security exploit (by the depth of the metaphor) the plot switches to a more obvious and almost sloppy “gotta go take a sh*t ,” with Rick literally declaring his intention at the end of the episode (speaking in an encapsulating fashion). This “escalation” is a common cadence to security attacks (starting small, ending big): you always start from a small crack and chip away until you have Domain Admin rights. Every hacker knows that!
Just before Rick can make use of the password, he is interrupted by assassins from the council of Ricks. Quickly, he escapes in what is a literal instantiation of an authentication replay or a kind of “session hijacking” attack. Here Rick swaps identities with someone in the group that is trying to catch him, thereby, tricking them into killing the wrong person. Rick has now gone from an interrogator in the prison to a member of SEAL Team Rick. One epic privilege escalation attack!

After killing the entire SEAL team, he makes his way to the citadel as Rick D99. He then pulls off another obvious privilege escalation attack by specifically asking for someone with a certain level of “higher” clearance. 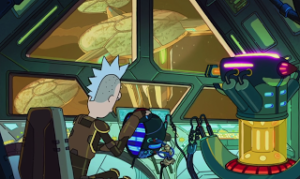 Rick Phone Phreaking/Hardware Hacking his way into the citadel

Assuming this role, he then moves to gain control of the entire domain and jokes about how bad the system design is (another jab at information security engineering). The design flaw here is that there is no further authentication or oversight needed to perform an incredibly dangerous function; you just walk up to it and press the right buttons – no, executive calls, no approval process…just buttons! He abuses this design as a citadel employee to teleport the entire citadel straight into the galactic prison he just escaped from, causing a massive war between the citadel and the galactic prison.

The person in the center here looks strikingly similar to Rick in the previous image. The armor, the hair. Some might recognize the “Butter Robot”-esque android being built in the background. This is the site banner for DefCon the world’s biggest hacking conference :).

Following this, Rick makes his way to Level 9, finally admitting his entire scheme was all an elaborate ploy to in fact “get Level 9 access without a password!” He explains his entire chain of exploits as a revenge arch triggered by the citadel interrupting his imminent access to Level 9 by the attempted assassination. Having gained Level 9 access, Rick uses what could be seen as another very old security attack called “Bit Flipping.” This term is sometimes used to loosely refer to attacks that can deterministically change something’s state in a way that affects security. Usually, these “states” are represented using simple Boolean values of 0 or 1. For example, Row Hammer has been exploited to flip bits in a table that holds security relevant information. Effectively, this is what Rick is doing with the currency value: flipping a 1 bit to 0. A small error that eventually topples an entire federation. Start small, end big! 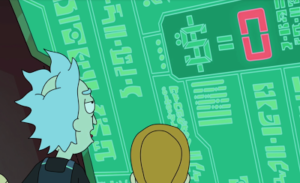 That’s it for now, until I dig up more macabre information security or extra-scientific analogies.
This blog was originally written and posted on September 25, 2017 by Keith Makan and is reproduced here with his express permission.