Security professionals are becoming more aware of backdoors, security bugs, certificates, and similar bugs within ICS device firmware. I want to highlight another bug that is common in the firmware for critical industrial devices: the remote access provided by some vendors between their devices and ftp servers for troubleshooting or testing. In many cases this remote access could allow an attacker to compromise the device itself, the company the device belongs to, or even the entire vendor organization.
I discovered this vulnerability while tracking connectivity test functions within the firmware for an industrial device gateway. During my research I landed on a script with ftp server information that is transmitted in the clear: 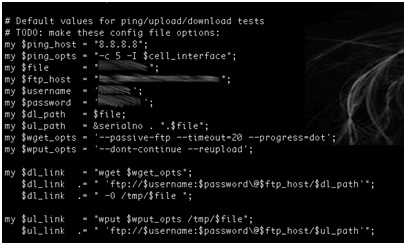 The script tests connectivity and includes two subtests. The first is a simple ping to the host “8.8.8.8”. The second test uses an internal ftp server to download a test file from the vendor’s ftp server and to upload the results back to the vendor’s server. The key instructions use the wget and wput commands shown in the screen shot.
In this script, the wget function downloads a test file from the vendor’s ftp server. When the test is complete, the wput function inserts the serial number of the device into the file name before the file is uploaded back to the vendor.
This is probably done to ensure that file names identify unique devices and for traceability.
This practice actually involves two vulnerabilities:
This combination could enable an attacker to connect to the ftp server and obtain the devices serial numbers.
The risk increases for the devices I am investigating. These device serial numbers are also used by the vendor to generate default admin passwords. This knowledge and strategy could allow an attacker to build a database of admin passwords for all of this vendor’s devices. Another security issue comes from a different script that points to the same ftp server, this time involving anonymous access.

This vendor uses anonymous access to upload statistics gathered from each device, probably for debugging purposes. These instructions are part of the function illustrated below. 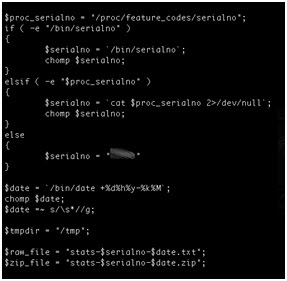 As in the first script, the name of the zipped file that is sent back to the ftp server includes the serial number.
The script even prompts the user to add the company name to the file name. 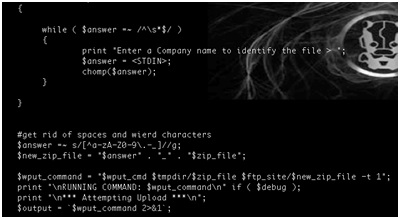 An attacker with this information can easily build a database of admin passwords linked to the company that owns the device.
The third script, which also involves anonymous open access to the ftp server, gathers the device configuration and uploads it to the server. The only difference between this and the previous script is the naming function, which uses the configs- prefix instead of the stats- prefix.

The anonymous account can only write files to the ftp server. This prevents anonymous users from downloading configuration files. However, the server is running an old version of the ftp service, which is vulnerable to public exploits that could allow full access to the server.
A quick review shows that many common information security best practice rules are being broken:
Based on this review we recommend some best practices to remediate the vulnerabilities described in this article: