By Christophe Alladoum – @_hugsy_
TL;DR: turn any open JDWP service into reliable remote code execution (exploit inside)
<plagiarism> Kids, I’m gonna tell you an incredible story. </plagiarism>
This is the story of how I came across an interesting protocol during a recent code review engagement for IOActive and turned it into a reliable way to execute remote code. In this post, I will explain the Java Debug Wire Protocol (JDWP) and why it is interesting from a penetration tester’s point of view. I will cover some JDWP internals and how to use them to perform code execution, resulting in a reliable and universal exploitation script. So let’s get started.
Disclaimer: This post provides techniques and exploitation code that should not be used against vulnerable environments without prior authorization. The author cannot be held responsible for any private use of the tool or techniques described therein.
Note: As I was looking into JDWP, I stumbled upon two brief posts on the same topic (see [5] (in French) and [6]). They are worth reading, but do not expect that a deeper understanding of the protocol itself will allow you to reliably exploit it. This post does not reveal any 0-day exploits, but instead thoroughly covers JDWP from a pentester/attacker perspective.
Java Debug Wire Protocol 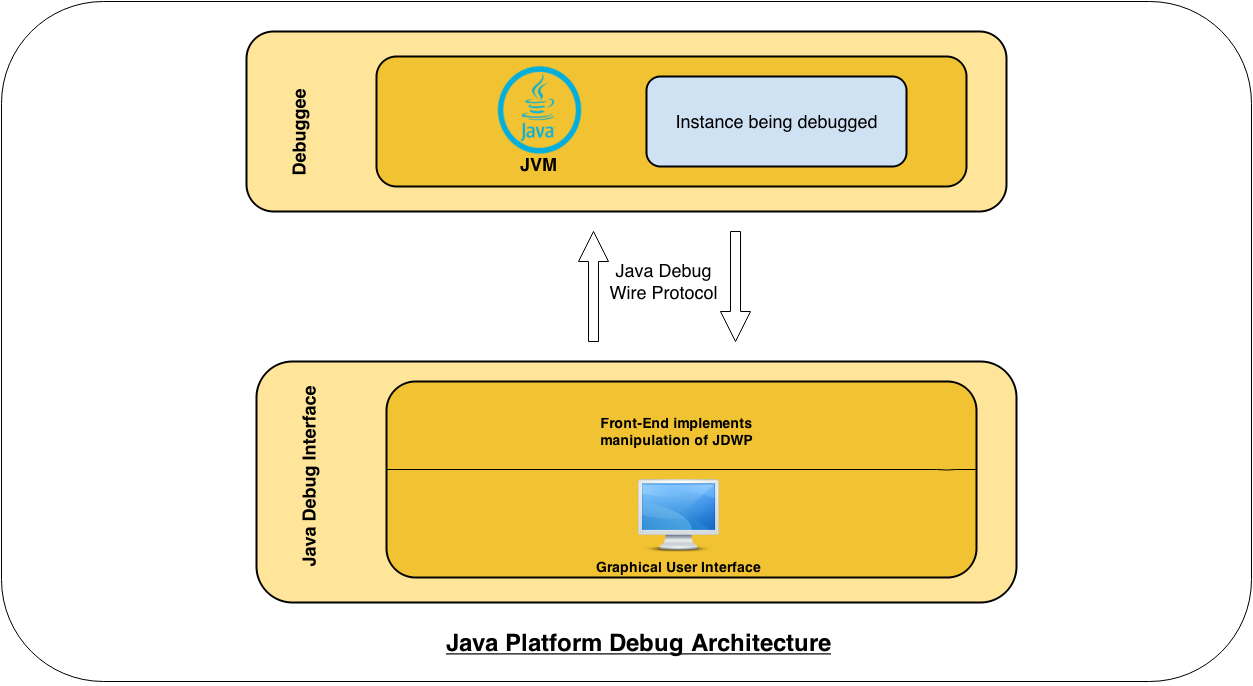 The Debuggee consists of a multi-threaded JVM running our target application. In order to be remotely debuggable, the JVM instance must be explicitly started with the option -Xdebug passed on the command line, as well as the option -Xrunjdwp (or -agentlib). For example, starting a Tomcat server with remote debugging enabled would look like this:

As shown in the architecture diagram, the Java Debug Wire Protocol is the central link between the Debugger and the JVM instance. Observations about the protocol include:
All of these observations make total sense since we are talking about a debugging protocol. However, when such a service is exposed to a hostile network, or is Internet facing, things could go wrong.

An experienced security auditor may have already realised that such a simple handshake offers a way to easily uncover live JDWP services on the Internet. Just send one simple probe and check for the specific response.

More interestingly, a behavior was observed on the IBM Java Development Kit when scanning with ShodanHQ with the server “talking” first with the very same banner mentioned. As a consequence, there is a totally passive way to discover an active JDWP service (this is covered later on in this article with the help of the (in)famous Shodan).

Communication
JDWP defines messages[10] involved in communications between the Debugger and the Debuggee.
The messages follow a simple structure, defined as follows:

The Length and Id fields are rather self explanatory. The Flag field is only used to distinguish request packets from replies, a value of 0x80 indicating a reply packet. The CommandSet field defines the category of the Command as shown in the following table.

Keeping in mind that we want to execute arbitrary code, the following commands are the most interesting for our purposes.
Not only does JDWP allow you to access and invoke objects already residing in memory, it also allows you to create or overwrite data.
“All your JDWP are belong to us”
As we have seen, JDWP provides built-in commands to load arbitrary classes into the JVM memory and invoke already existing and/or newly loaded bytecode. The following section will cover the steps for creating exploitation code in Python, which behaves as a partial implementation of a JDI front end in order to be as reliable as possible. The main reason for this standalone exploit script is that, as a pentester, I like “head-shot” exploits. That is, when I know for sure an environment/application/protocol is vulnerable, I want to have my tool ready to exploit it right away (i.e. no PoC, which is basically the only thing that existed so far). So now that we have covered the theory, let’s get into the practical implementation.
When faced with an open JDWP service, arbitrary command execution is exactly five steps away (or with this exploit, only one command line away). Here is how it would go down:
1. Fetch Java Runtime reference
The JVM manipulates objects through their references. For this reason, our exploit must first obtain the reference to the java.lang.Runtime class. From this class, we need the reference to the getRuntime() method. This is performed by fetching all classes (AllClasses packet) and all methods in the class we are looking for (ReferenceType/Methods packet).
2. Setup breakpoint and wait for notification (asynchronous calls)
This is the key to our exploit. To invoke arbitrary code, we need to be in a running thread context. To do so, a hack is to setup a breakpoint on a method which is known to be called at runtime. As seen earlier, a breakpoint in JDI is an asynchronous event whose type is set to BREAKPOINT(0x02). When hit, the JVM sends an EventData packet to our debugger, containing our breakpoint ID, and more importantly, the reference to the thread which hit it.

It is therefore a good idea to set it on a frequently called method, such as java.net.ServerSocket.accept(), which is very likely to be called every time the server receives a new network connection. However, one must bear in mind that it could be any method existing at runtime.
3. Allocating a Java String object in Runtime to carry out the payload
We will execute code in the JVM runtime, so all of our manipulated data (such as string) must exist in the JVM runtime (i.e. possess an runtime reference). This is done quite easily by sending a CreateString command.

4. Get Runtime object from breakpoint context
At this point we have almost all of the elements we need for a successful, reliable exploitation. What we are missing is a Runtime object reference. Obtaining it is easy, and we can simply execute in the JVM runtime the java.lang.Runtime.getRuntime() static method[8] by sending a ClassType/InvokeMethod packet and providing the Runtime class and thread references.
5. Lookup and invoke exec() method in Runtime instance
The final step is simply looking for the exec() method in the Runtime static object obtained for the previous step and invoking it (by sending a ObjectReference/InvokeMethod packet) with the String object we created in step three.

Same command line, but against a Windows system and breaking on a totally different method:

We execute our exploit to spawn a bind shell with the payload  “ncat -e /bin/bash -l -p 1337”, against a Linux system:

Same win on MacOSX:
pentests-Mac:~ pentestosx$ lsof | grep LISTEN
ncat      4380 pentestosx    4u    IPv4 0xffffff800c8faa40       0t0        TCP *:menandmice-dns (LISTEN)
A link to full exploitation script is provided here[1].
The final exploit uses those techniques, adds a few checks, and sends suspend/resume signals to cause as little disruption as possible (it’s always best not to break the application you’re working on, right?). It acts in two modes:
This exploit script was successfully tested against:
As Java is platform-independent by design, commands can be executed on any operating system that Java supports.
Well this is actually good news for us pentesters: open JDWP service means reliable RCE.
So far, so good.

What about real-life exploitation?

As a matter of fact, JDWP is used quite a lot in the Java application world. Pentesters might, however, not see it that often when performing remote assessments as firewalls would (and should) mostly block the port it is running on.
But this does not mean that JDWP cannot be found in the wild: 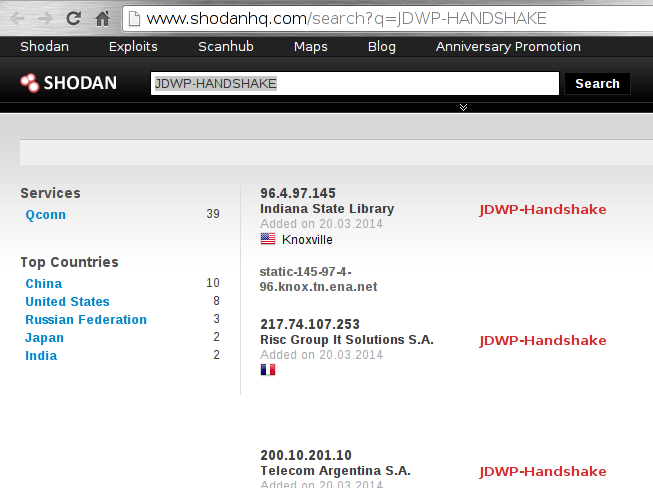 This is actually an interesting finding because, as we’ve seen before, it is supposed to be the client-side (debugger) that initiates dialogue.

These are just a few ways to discover open JDWP services on the Internet. This is a great reminder that applications should regularly undergo thorough security reviews, production environments should have any debugging functionality turned off, and firewalls should be configured to restrict access to services required for normal operation only. Allowing anybody to connect to a JDWP service is exactly the same as allowing a connection to a gdbserver service (in what may be a more stable way).
I hope you enjoyed reading this article as much as I enjoyed playing with JDWP.
To y’all mighty pirates, happy JDWP pwning !!

I would like to thank Ilja Van Sprundel and Sebastien Macke for their ideas and tests.